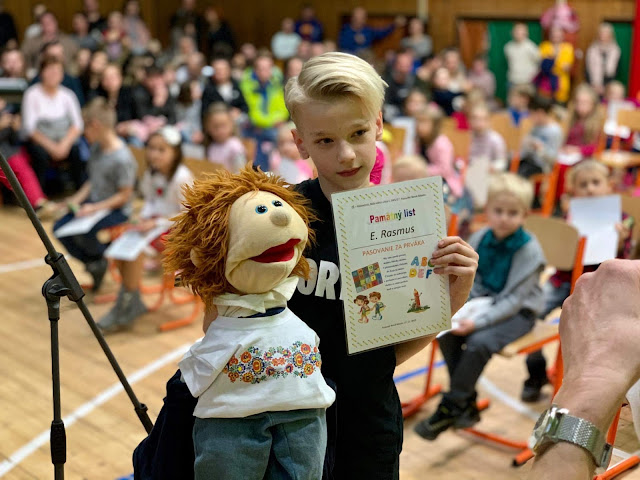 It was the end of November when Mr. E.Rasmus travelled to Slovakia from Italy. The first week his program was full. He was busy. He went to the youngest pupils and celebrated their special day with them. Becaming pupil of the first grade is a big event in our school. New responsibilities, rules and information arrive. On Wednesday November 27th 2019 our first graders became really pupils of our school. They presented poems, sang songs. During the whole celebration we were escorted by E.Rasmus who was accepted among the first graders like our honourable guest.

In December E.Rasmus was with the fourth graders for few days. He could learn Slovak, Maths, Biology and he sang and drew. 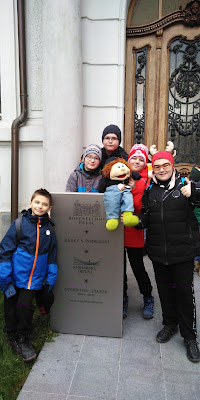 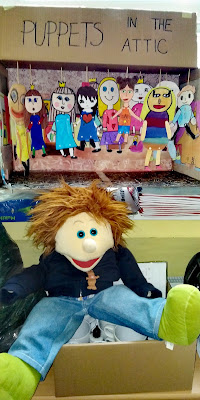 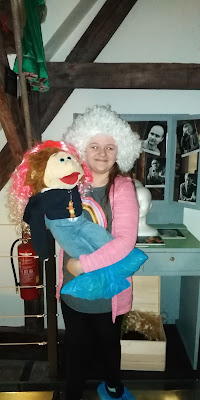 December 20th Mr.E.Rasmus visited the town of Žilina. Žilina is 10 kilometers far away from our town, it is a lot bigger and more people live there. E.Rasmus travelled by train together with pupils from 6.A. They visited Rosenfeld´s palace where, in the attic, the exposion of puppets was waiting for them. After they took part in a workshop - they made their puppets.

Christmas of 2019 - E.Rasmus spent it with a family of Vanesa from 6.A. He helped her to bake cookies, he decorated Christmas tree and relaxed watching TV. E.Rasmus met friends of Vanesa.

E.Rasmus also spent a week with Lucia and her family. Saturday was a cleaning day and he liked it. He washed floors, made beds, washed the dishes. Lucia´s mum works in a library that means he visited it and read a lot of books. They read a book about Slovakia too.

Season of the pandemic was weird. E. Rasmus met up with a turtle called Ophelia  and he spent a few weeks with her. Ophelia came because of e-twinning. They were happy, when the youngest pupils came back to school in June. E. Rasmus and Ophelia were telling each other stories during the quarantine. E. Rasmus was travelling through Europe, he was in Germany, Greece, Spain and in Italy. E-twinner Ophelia travelled to Slovakia by plane from Greece and she was telling him about the sea.

At the end of September 2020 E. Rasmus, the fourth graders from 4.A class and the fifth graders from 5.B were making posters about languages in Europe. They learned new names of countries and nationalities in English language and they found out about partner schools and current Erasmus+ projects with Mr. Erasmus. You can still find the poster in a school corridor. Now, everyone should know that our Erasmus+ partners are schools from Greece, Germany, Spain, but also from Finland, or Italy. Pupils also learned that Czech and Croatian people belong to Slav people linguistically, because they have similar language to ours, or that Austrian and Belgian languages don't exist. 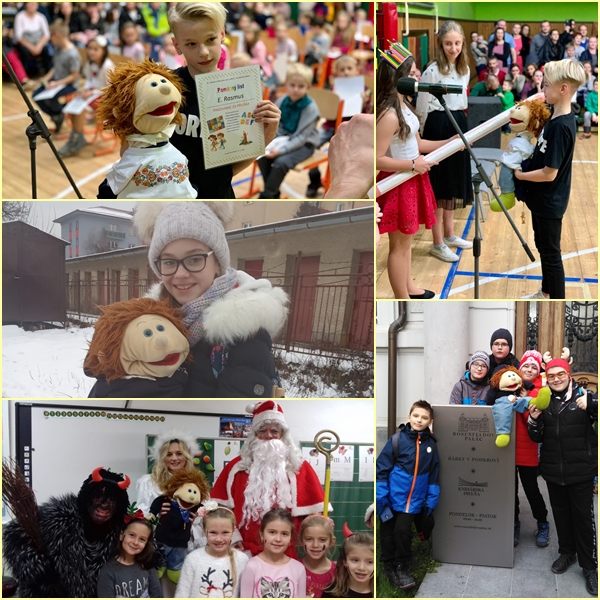 Pupils from 5.C class were making dialogues. Duos from France, Finland, Italy, Spain and Germany met up in one room. They used English for making acquaintance, but their task was to learn their classmates to greet each other using their native language. Except Hello, you could hear Salut, Hola, Addios, Näkkemin, Bonjour, Guten Tag, Adios and many more.

In October 2020, Mr. Erasmus experienced happy Erasmus Days in Slovak school. The fifth graders were asking him a lot of questions and they filled his birth certificate. They found out everything about him, even his favorite food. Can you guess which one is it?

Since Corona virus closed all schools, E. Rasmus stayed in Slovakia longer than everyone expected. He couldn't travel to the Czech Republic. No children came to Slovakia, because the borders were closed due to Covid-19. In spring 2021 he is travelling home. His journey will end in Germany where he can finally meet his friends again in E. Kastner Primary School in Leipzig.

Written by Zuzka and Diana, the 8Graders 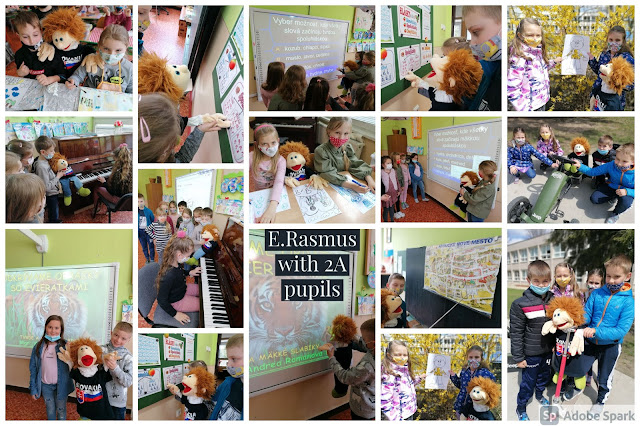 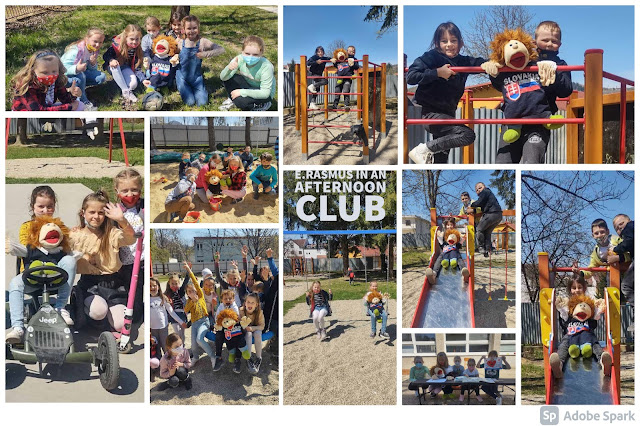 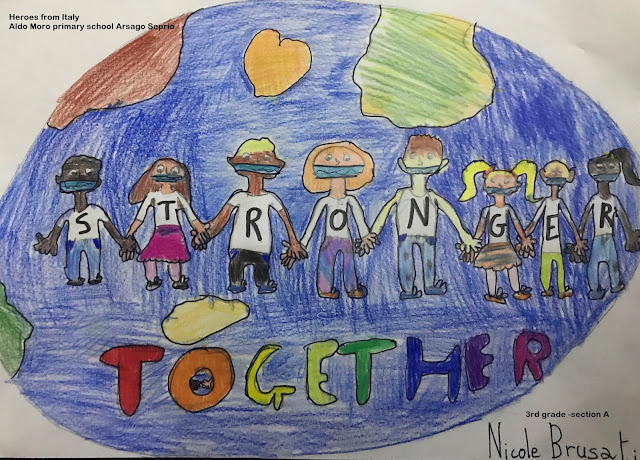 All the children of our project have been confined to their homes from March the 16th. The saying STAY SAFE, STAY HOME is the best known saying of the 1st half of 2020. Across Europe and the US, rainbow drawings have started to appear since March. Drawing a rainbow on a piece of paper during Corona Times is believed to be a symbol of hope and taping it to the window is considered to express a sense of community with the rest of the world. Slovak and Italian children of Childhood in a Box did some drawings like this and even if they are homeschooling during COVID 19 days, they linked their drawings to our project topic which, for the 2nd Year, is "HEROES". So, you can discover our pupils´present days heroes. They are mostly doctors and nurses helping all the ill people fighting against new Corona Virus which started to spread from China in January 2020. Slovak pupils are from the Year 6. Italian children are mostly from the Year 3, so they are younger than Slovak ones. Wha 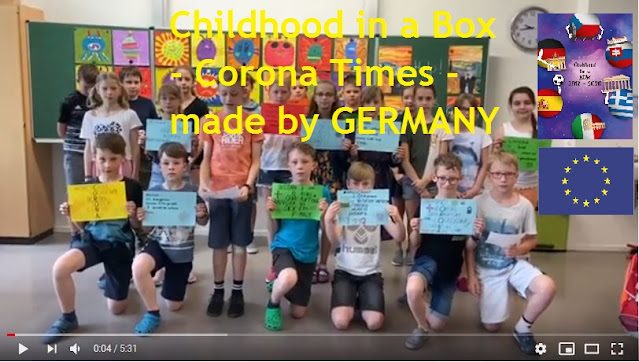 As an extra activity we decided to add something explaining the kids feelings and thoughts during the Corona time when schools were closed.  The task was to summarize the way, children in each experienced the time during the lock down. They were to share their thoughts using art or language in a creative way. The outcome of the German school is this video with pictures, interviews and poems.

WHAT WOULD I DO if I HAD SUPERPOWERS FOR ONE DAY ... padlet activity